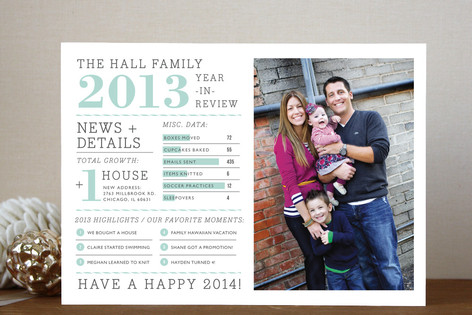 The rise of social media as our daily communications tool to friends and family members seems to be slowly eclipsing the necessity of the traditional annual ‘holiday letter‘.

Through social media outlets like Facebook, Twitter, YouTube, LinkedIn and countless others, we learn about happenings in the lives of people in our network on a continual basis. From family trips to crucial ‘life events’ to successes at work, our lives are already out there, documented by way of status updates and tweets.

So people are questioning the need of a recap holiday letter that fills in all the highlights of the year. Why bother when most of your friends and family will already know what’s up in your life? Perhaps this is the year that you want to change the way you communicate during the holidays and send photo Christmas cards instead.

The decline in holiday letter writing stems from the way men and women are increasingly using social media channels. Some studies indicate that more women than men are greater power users of certain social networks. For instance, according to iMediaConnection, women dominate the Pinterest user base, with estimates ranging from almost 75 to 97 percent usage. Women also spend more time on Facebook, with almost a 60-40 percent split between women and men. If the holiday letter is traditionally written by the woman in a relationship or family, then it seems that it’s an increasingly unnecessary activity in the context of more social media updates.

This upcoming holiday season, you may want to find a new way to send your annual update and let images tell of your happiness. Send an awesome Christmas photo card instead. Be sure not to make it a traditional boring shot of a single couple or family shot in front of the Christmas tree or fireplace. Use cool graphic design elements, or design a collage of online (or unseen by your publics) photos you’ve posted throughout the year, or mix it up with your Twitter picture or a mix of Facebook travel photos.

Try Minted.com to transform your holiday photo idea from the mundane to the awesome. Minted is a new site that offers up fresh design rethinks and awesome makeover formats for holiday cards, wedding invitations, birth announcements and more. Photo cards are easy to make, easy to send and everyone enjoys them.

Remember, a wise man once said that a picture is worth 1,000 words. With decreasing use of holiday letters, maybe it’s time to consider the sage’s advice.